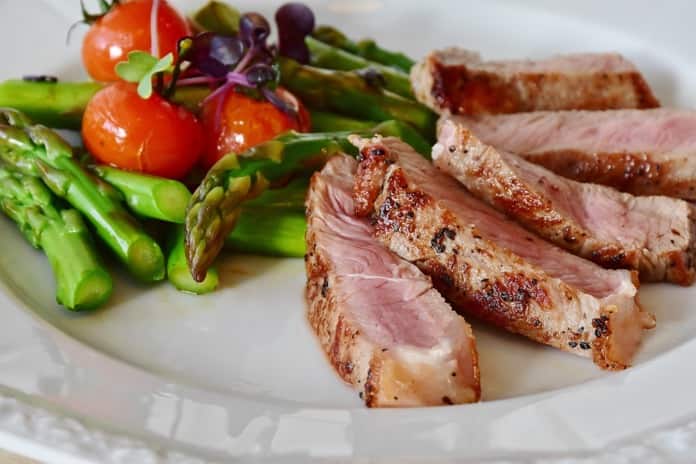 It is well known that meat consumption, particularly in high-income countries, can contribute to chronic health issues. It is lesser known that meat consumption also has a substantial environmental impact. As much as 30% of global greenhouse gas emissions are produced from agriculture, with livestock making a large contribution to this percentage. One effect of this is acidification of the ocean, which can affect the growth of many marine creatures. In addition, intense animal production can result in a large run-off of nutrients into lakes or rivers producing algal blooms, which use up oxygen to the demise of animal life. Therefore, reducing meat consumption would be beneficial both to our health and the environment. However, many factors including affordability, appeal, and acceptance need to be taken into account when designing a healthy, environmentally friendly diet.

Diet and the Environment

Several studies have looked at how diets can be altered in a way that is more sustainable for the environment. A France-based research group identified two previously unconsidered factors to take into account when designing a diet with reduced meat consumption. The first was related to bioavailability, which is the extent to which our bodies absorb nutrients from meat alternatives compared to meat itself. The second factor was the animal products that are co-produced within the same system. For example, dairy cows produce milk as well as meat. The researchers argue that this is important because the more produce that can be obtained from one system the lesser the environmental impact.

The study, published in PLoS ONE, used computer modeling to design three different diets and looked at how these diets differed to the standard French diet for men and women, which had been previously described in 2007. All diets were designed such that the above-described environmental impacts were each reduced by 30%. Also, the quantity of food consumed was to be similar to the standard French diet to promote acceptance.

Sustainable Diets are Better for the Environment

The results showed that compared to the standard French diet, all newly designed diets cost slightly less money per day. Fruits and vegetable and starch quantities increased in all diets. There was a vast decrease (32-78%) in meat consumption for all diets for men and women compared to the standard French diet. The greatest percentage decrease in meat consumption was with beef and lamb, where the diets had 78-87% less of this type of meat. However, in the diets where absorption of nutrients and co-production were taken into account, the meat consumption was higher than the diet that only took into account the RDAs.

In order to meet nutritional requirements with reduced meat consumption, food substitutions were required. In particular, to meet absorbable iron requirements for women the diet included more blood sausage. However, the other nutrients studied, namely zinc, protein, and vitamin A could be available in the RDAs by combining a reduced source from meat consumption with plant-based alternatives. In the third diet, the amount of meat consumed was more than the other groups once co-production systems were taken into account. By elevating the meat consumption, the diet had to contain less of certain other food types with an environmental impact to keep the impact reduction at 30%. These food types included alcoholic beverages and hot drinks.

The researchers note that it is appropriate to take into account the bioavailability of nutrients and co-production systems when designing environmentally friendly diets. They suggest that further diets be designed to take into account more of these types of factors. For example, casein found in milk was not incorporated into the computer model in this study but it can decrease the absorption of iron. The researchers also highlight that other co-production should also be considered when modeling further diets, such as poultry and egg production.

The model used by the researchers also has other limitations. It does not take into account the effect on water footprint of vegan and vegetarian diets. It also does not take into account that beef production can have some environmental advantages such as making use of inedible resources, such as grass, and helping maintain pastureland and thereby participating in the conservation of biodiversity.

It appears indisputable that for environmental sustainability, meat consumption needs to be severely reduced. However, this study demonstrates that many factors need to be considered to design an environmentally sustainable diet.