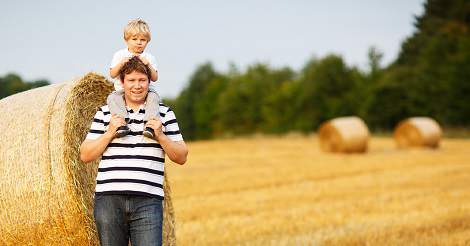 
A recent study published in the journal Thorax has shown that living on a farm in childhood is associated with a lower risk of developing allergic diseases later as an adult, and strong lungs in women, compared to being brought up in an urban or rural area.

There has been a sharp rise in the incidence of allergies and asthma within recent decades. Many theories have been put forth to explain this rise, including the so-called ‘hygiene hypothesis’, which suggests that a lack of early life exposure to microbes such as viral, bacterial, and parasitic agents can weaken the immune system and increase susceptibility to allergic diseases such as asthma and hay fever. A number of studies have examined the links between early life farm exposure and allergic diseases in childhood and have shown that early life farm exposure is related to a reduced risk of allergic disease, asthma, and wheeze. Exposure to larger loads of microbes related to farming environments has been suggested as contributing factors in this association. However, the bulk of existing studies have centered on early-life farm exposure and allergic and respiratory disease outcomes in childhood, while fewer studies have examined the effect of childhood exposures on disease outcomes in adulthood, and particularly adult lung function.

Thus, researchers designed a study to further investigate the idea that early life exposure to environmental or microbial biodiversity might have an influence on allergic diseases and lung function in adulthood. The researchers examined data taken from over 10, 000 people between the ages of 26 and 54, living in 14 countries, who had taken part of the European Community Respiratory Health Survey II between 1998 and 2002. The participants were questioned about where they were raised before the age of 5 — in an inner city, in a country village or a rural-like setting, in a city suburb or small town, or on a farm. They were also asked questions about other early life exposures, including the number of pets (dogs and cats), the number of children in their family and whether they shared a room with any of them, as well the size of any nursery school or day-care classes they took part in; the researchers used this information to calculate, for each participant, a ‘biodiversity score’ between 1 and 5. The researchers also tested the participants’ lung strength and sensitivity to allergens in adult life and inquired about their personal or family history of asthma, wheeze, hay fever, or bronchial hyper-responsiveness (over-reactive airways). Associations between the participant’s biodiversity score and their lung function, allergic sensitization, asthma, rhinitis and bronchial hyper-responsiveness were evaluated.

The findings, published in the journal Thorax, suggest that childhood exposure to farm environments is protective against later allergic diseases in adulthood. The researchers found that participants who were raised on farms were more likely to report having had older siblings, pets, and having shared a bedroom. Further, they were less likely to have allergic nasal symptoms or overreactive airways and be less sensitized to allergens compared to those living in any other environment. In fact, children raised on a farm had a 54% lower chance of having hay fever or asthma and a 57% lower chance of having allergic nasal symptoms than those who lived in an inner city. In contrast, participants who were raised in a town, city suburb or village before five years of age were only somewhat less likely to develop hay fever or asthma, and not less likely to suffer from allergic nasal symptoms in adulthood compared to those raised in an inner city. Additionally, participants brought up in farm environments were 50% less likely to have asthma (allergic or nonallergic) compared to those raised in any of the other environments.

Moreover, among participants with an inner city upbringing, a greater biodiversity score was predictive of less allergic sensitization. While the investigation further demonstrated protective effects of markers of microbial biodiversity (e.g., daycare, pets, siblings, etc.) on adult allergic disease such as asthma in participants who were raised in an inner city, the effects were not as strong as those associated with farm upbringing. Put in another way, whether or not one developed asthma or allergies when they became adults was most predicted by where they had lived in their first five years of life. The researchers suggest that extended contact with distinctive farm exposures such as livestock with substantial microbial diversity may support the connection between a childhood spent on a farm and the development of allergies.

The researchers also found that there was a small overall difference in terms of lung strength between the different exposure groups, but women who were raised on a farm before the age of five were prone to having stronger lungs and improved lung function compared to people raised in any other environment.

The overall findings support the beneficial impact of early life farm exposure on allergy risk and lung strength in adulthood. The findings of this study were surprisingly consistent across all 14 countries involved in the study, putting forward that the effects of farming may be a result of biological factors instead of social or cultural ones that would vary between countries. However, the researchers advise that the findings cannot determine cause and effect as the study was of an observational nature.