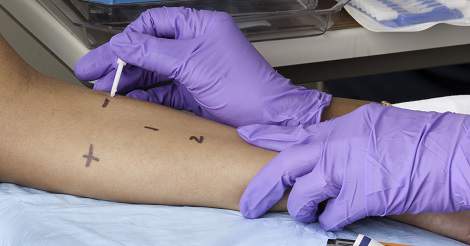 
80% of patients who believed that they were allergic to penicillin received more effective therapy after penicillin skin allergy testing.

Penicillin is a common antibiotic that is used to treat infections caused by bacteria. Up to 15% of patients admitted to hospitals report that they have an alleged allergy to penicillin. While penicillin allergies can be life-threatening, frequent self-report of the allergy can result in suboptimal antibiotic use, increased length of stay for the patient, microbial resistance, health care costs, ICU admission, and even death. The penicillin skin test (PST) can reliably predict a negative reaction to more than 80% of the major determinants that trigger reactions to penicillin. Unfortunately, the PST is not readily available in clinical practice, and is typically administered by allergists or immunology physicians. As such, it is of interest to examine whether the integration of a PST service into infectious disease practice is feasible and acceptable, and if it has the ability to impact the optimization of antibiotic usage in a hospital environment.

The PST service pilot study was conducted by researchers at the University of Maryland and implemented at the University of Maryland Medical Centre. Over the course of 11 months, 90 patients were assessed for PST and 76 patients were tested. Patient eligibility was determined based on their allergy history and PST was performed by a medical fellow supervised by an attending physician. The PST consisted of a skin prick test, where penicillin (diluted to 10,000 units per mL), a positive control (histamine), and a negative control (sodium chloride) were administered. Redness and swelling 3mm or greater than the negative control was indicative of a positive test. If the initial results were negative, an intradermal test under the epidermis was administered and examined after 15 minutes. If the results were still negative, a single oral dose of 250mg of amoxicillin or similar antibiotic was given. A negative reaction to the histamine test was considered an indeterminate result. Appropriate recommendations for antibiotic therapy were then based on the PST results.

The PST service was well received by hospital health care professionals and the medical fellows conducting the tests. Both groups believed that the implemented service was overall useful in everyday practice. The most commonly reported allergic reaction to penicillin by patients was hives. Of the valid PSTs, it was observed that 96% were negative. Of those that were negative, 84% of patients received antibiotic changes, most to penicillin (55%) followed by cephalosporin and carbapenem. Patient electronic medical records were also updated with their PST information.

In this study, the most frequent infections experienced by inpatients were those affecting bones and joints. Patients who were allergic to penicillin were most commonly prescribed vancomycin and aztreonam prior to the PST. After the PST results, 20 patients were switched from aztreonam to a more clinically effective alternative therapy. As a result, 80% of patients received more effective therapy and 61% received more cost-effective therapy that translated into $26,000 in savings per year. Antibiotic optimization had the greatest impact in patients with invasive MSSA or enterococcal infections who were allergic to penicillin, and in patients before bone marrow or organ transplant, in anticipation of future antibiotic needs.

This pilot study demonstrated that a PST program can be successfully implemented at a large urban medical center with a positive impact on patient outcomes. The elimination of a penicillin allergy from a patient’s medical record can play an important role in managing their care by improving allergy documentation, and lead to more appropriate antibiotic selection, improved institution microbial stewardship, and safer administration of antibiotics. Since the PST is a straightforward test, medical fellows, physicians, nurses, medical assistants, and pharmacists can be trained to administer it – a certified allergist or specialist is not necessarily needed. This model could, therefore, increase access to PST at institutions without sufficient access to specialized personnel.